Building a Community of Life-Long Artists

Founded in 2001, the Winchester Steel Co., under the direction of CEO, Todd Phillips, has become the premier high school steel drum band in central Ohio. The list of notable performances include: an inauguration reception at the Ohio Statehouse for dignitaries and invited guests of the Strickland/Fisher administration; opening for the Columbus Jazz Orchestra at the historic Southern Theater in 2004, and at the Columbus Zoo for the JazZoo concert series every year since 2006.

The band shared the stage with Pro Musica, Contemporary American Theater Company and Opera Columbus when they accompanied BalletMet YouthMet! dance ensemble in a performance in 2004. The Winchester Steel Co. has appeared as featured performers at the Lancaster Arts Festival since 2003. They have also been pleased to present several concerts for area schools, local festivals and private parties.

The 32-member ensemble performs an average of 15 times per year in both full band and combo-size groups throughout central Ohio.

Because of the tremendous popularity of the Winchester Steel Co., the steel band program also includes the CW Middle School Band, the CW High School Beginning Band and our Adult Community Band.  The department is committed to creating excellence in Music Education using the Academic Content Standards laid down by the Ohio Department of Education.

Excerpts for our lastest recording, Message in a Bottle.

The Winchester Steel Co. is excited to announce

There will many smaller concerts through out the year.  For more information on performances and how to book an event, contact us at: winchestersteelco@yahoo.com.  We can also be reached through our FaceBook page.  Be sure to ‘Like’ us to find out all about our group.

For a listing of the entire Canal Winchester Performing Arts Department concerts and rehearsals: 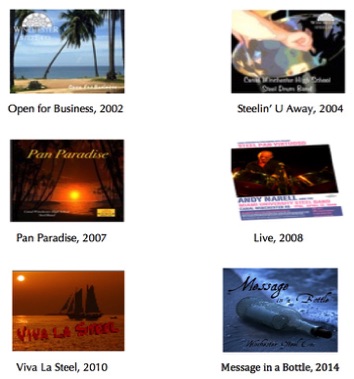